Our goal is to provide you with a safe and reliable supply of drinking water. Castle Rock’s water quality reports or “consumer confidence reports” are produced annually to describe the overall quality of water from its raw collection and storage to the treated purity at your tap.

We are pleased to report Castle Rock had no health-based violations or formal enforcement actions for the current reporting period.

Water quality measures involves complex testing, chemistry and engineering. Eliminating all elements and compounds from water is unrealistic and is not always desirable. If we removed everything from our water and supplied pure H2O, this would not be good for your health. To ensure safe water quality, there is significant monitoring and reporting at the local, State and Federal level. We conduct daily, monthly, quarterly and annual testing throughout the year to analyze the quality of water throughout the water treatment and distribution process. Customers can view one of our water quality testing labs when taking a tour of the Plum Creek Water Purification Facility. 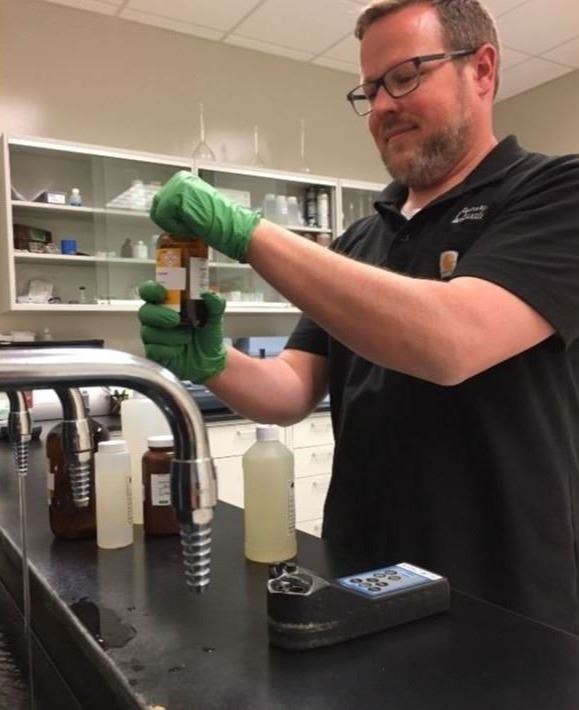 In 2013, Castle Rock Water began using chloramines as a secondary disinfectant instead of chlorine alone. Chloramines last longer in the distribution system and produce fewer disinfection byproducts than chlorine. While this process was relatively new to our customers, many municipal and private water providers across the United States and Canada have used this safe, effective disinfectant for more than 90 years. Denver and surrounding communities, for example, have been using chloramine-treated water since 1917.

Front Range communities, like Castle Rock, have Moderately Hard to Hard water. Hard water is created when water moves through soil and rock dissolving small amounts of naturally occurring minerals. These minerals primarily include calcium and magnesium which are essential minerals frequently found in food. Hard water is not a health concern and thus water providers typically do not treat for it.

There are both advantages and disadvantages in having hard water. Hard water tends to have a better taste and the calcium is actually good for children’s teeth and bones. Calcium and lime can coat pipes which is an added protection to pipes. However, this build up, over time, could eventually limit water flow through the pipe. Hard water can be noticed when these minerals precipitate out of the water, leaving a scale or calcification residue. This scale can usually be removed from applicances and fixtures with vinegar or other commercial products. If hard water is used in a humidifier, it can produce a fine white residue on furniture. One way to prevent this is to use distilled water in a humidifier. Hard water can make soap more difficult to lather and create soap scum, but many soaps and detergents available today contain softeners that help negate these effects.

No lead issues in Castle Rock

You may have heard some cities in the United States having issues with lead in their water. However, Castle Rock does not have any such issues.

Lead is not found in the distributed water, but enters the water through contact with plumbing pipes and fixtures within the home. It does this by leaching through the corrosion of pipes, solder, faucets and fittings. Since testing began in 1992, Castle Rock Water has only found one case in which private plumbing corroded to the point the fixture needed to be replaced.

Castle Rock Water is required by state and federal regulations to conduct periodic lead and copper testing. Samples are collected from indoor taps in designated single family homes built between 1982 and 1988. These homes have been identified because they were built during the time-frame when lead-based solder was more widely used. In 2016, we voluntarily expanded the testing opportunity beyond the required regulatory sampling, to any home likely to have lead-based plumbing materials.

If you believe your home might contain lead plumbing materials and would like to participate in the sampling program, please complete the in-home lead testing form and you will be contacted for consideration. Residents can also contact the Colorado Department of Public Health and Environment Laboratory Services Division at 303-692-3090 or Colorado.gov/CDPHE where water testing is available for a small fee at any time.

No PFAS in Castle Rock water

With concerns about specific contaminants in water sources that arise in other communities, Castle Rock Water tests for many of these substances and addresses them, if needed. Castle Rock Water has tested for per- and poly-fluoroalkyl substances (PFAS). There has been no detection of PFAS compounds in our finished drinking water. We are not aware of PFAS-generating industries in the Town or in the watershed, and our Fire Department uses foams that do not contain PFAS.

Additionally, with the completion of improvements for handling reuse water at our water treatment facility in late 2020, our processes will effectively remove trace amounts of PFAS that could potentially come from fire-resistant clothing, Teflon coatings on cookware, and other PFAS containing products and household items.